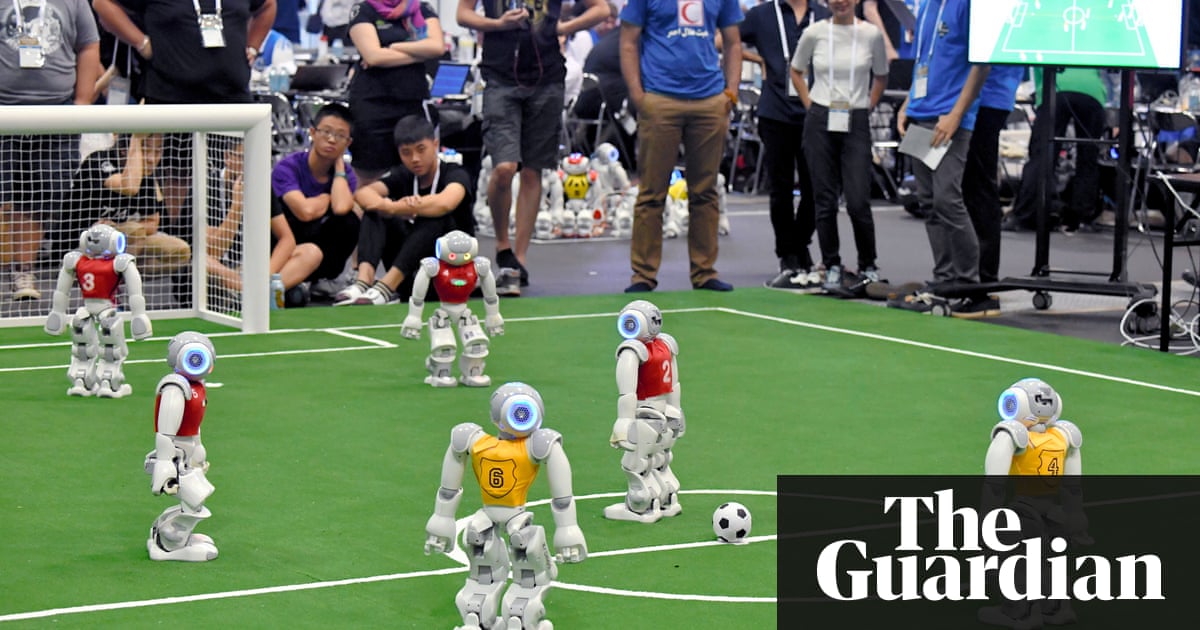 If you’d like to know how things are going in the world of robotics, you would do well to attend RoboCup — the world cup of robot football — and not spend too long looking at the field.

Robots are terrible soccer players. They can’t run, they can’t jump, they sometimes wander off the pitch in a stupor, and after kicking the ball they often fall over like toddlers hitting a wall at the end of a Smarties binge. In the pantheon of computer-driven non-human sporting accomplishment, if Kasparov v Deep Blue is a 10 and sending a Black & Decker Toast-R-Oven down a slope tied to a snowboard is a one, then robot football might rate a five. The novelty of a yellow-carded beep-boop-beep-boop from some deeply funded German university’s tech lab wears off pretty quickly.

Or at least it does for me. Almost everyone else at Le Palais de Congrès de Montreal, the airplane hangar-like site of the 22nd Robocup International Competition and Symposium, is riveted, if not by what’s happening on the various fields of competition, then by what’s on their insanely wired laptops, where the programs that will eventually lead to more autonomous robotic sport are being fine-tuned.

There are 35 countries, 5,000 robots, and 4,000 humans participating in this year’s Robocup. Some of the soccerbots look like cable boxes on wheels; others look like skinless garage Terminators with red-lit death eyes.

For natives of school and university robotics labs, Robocup carries more than a frisson of excitement. “It’s the thing we wait for all year,” says Lauren Copland, an 18-year-old engineering student from Minnesota. “Last night at dinner I sat next to one of the MIT teams and honestly, I couldn’t even believe it was happening.”

Copland is wearing a red boiler suit bearing the name of her school and her team’s sponsors. It is tied at the waist. “The sweat in here is crazy,” she says, breathlessly. “People have been here all night. Our coach told us when we came in this morning, ‘get ready, it’s going to stink. It’s going to be a mess.’”

Indeed, the packed room is a collision of hyper-complex thought clouds mingling with clouds of almost hallucinogenic body odour. Everywhere you look, some noodle of an 18-year-old genius from Bonn or clip-bearded prof in terrible jeans from Sydney is sitting with a drill or a robot head in one hand while tapping on a computer with the other, surrounded by crackers, granola bar wrappers and empty Gatorade bottles. Half the people I speak to have what could best be described as M&M breath.

And most do not want to speak with me. “Excuse me,” says a woman from one of the Iranian teams, “but talking is not now possible, because my robots are very much wanting me.”

To write that this is a world of nerds is missing the mark; Robocup is more proof that we are living in a post-nerd world. At the opening ceremony, the president of the Robocup Federation, Daniel Polani, a professor of artificial intelligence at University of Hertfordshire, mocked those who once mocked Robocup. “People would say, oh, go and be a doctor, be a lawyer — do something real.” Now, says Polani, everyone knows robots are our future, “and we will all make so much more money than the doctors and the lawyers.”

So ribbing the robot wonks today is like laughing at computer geeks in the 1980s. We all know who has the last laugh. Oliver Mitchell, a venture capitalist focused on automation technologies, says the technologies being employed by Robocuppers “are elemental to what we’ll be seeing commercially not too far down the road.”

“The same vision that it would take for a robot to kick a ball to its mechanical teammate could be used in robots in a manufacturing centre,” says Mitchell. “The way a soccer robot can avoid an obstacle on the field? It’s the same way an autonomous vehicle might avoid obstacles on the road. The question here is what technologies will come from competitive play? How will the machine behaviour end up being useful to the agricultural marketplace, to autonomous driving, to smart cities?”

In recent years, Robocup has expanded competition into categories that have more direct real-world applications. There is now a logistics league, and one for domestic robots, and one for work robots. The team in the red boiler suits are not in Montreal for football, but rather Robocup Rescue, a competition for robots designed for use by emergency medical workers. Their robot is trying to manoeuvre a network of pipes — a stand-in for debris typical of an earthquake in an urban setting. “The robot has to get through without breaking the pipes, or touching the walls,” explains Copland, “because if there is a collapsed ceiling, moving any debris can bring everything down.”

I retreat to the Robocup bleachers, passing the pen where domestic robots serve drinks and tidy rooms, and another where robots are repeating numbers back to other machines. I think of a friend of mine who works in Silicon Valley, who told me 15 years ago that soon phones and televisions and computers would all merge onto the same device, something we’d carry around. Back then, I could barely believe such a mingling could exist. I think about Google Glass, and outsourced memory, and bionics that can make the legless faster than those with naturally able bodies.

I think about commercially available sex robots, and robots that connect with autistic children and Alzheimer’s patients, and how Adidas has brought some manufacturing back to Germany by using factory robots instead of human labour. I watch the green pitches below, where glossy white robots are playing the beautiful game slowly and gracelessly, albeit without anybody pulling any levers. And I know I am watching the seeds of the next big change.